I already wrote about my gear following my Yakushima Trek (read here), but Kiwi Sig Other thinks it’d be interesting for y’all to see what it looks like and how I pack. I’m just a beginner backpacker (lifetime 3 overnight backpacking trips) and made my gear choices based on other peoples’ great blogs and Youtube videos. On the Internets, newbies often post about all their gear and ask a more experienced community for a shakedown, but I haven’t ever weighed my stuff since I don’t have a scale and I think the key is probably to get out there with all your gear and figure out what works and what you can live without.

Here’s pretty much all the stuff I brought on the Shinetsu Trail, minus food and clothing worn.

All the things in my pack for the Shinetsu Trail. How did I fit it all in there? With food, too!

From left to right, top to down- ish:

I took Wilderness Advanced First Aid  with WMA Japan in May (hope to finally write up a post about that experience soon), which led to beefing up my first aid kit. This is what I threw together for now.

What’s in my kit (roughly top to bottom, left to right):

This is a work in progress. I’ve got a swiss army knife and some other things in my pack that double as first aid tools. As with anything else in the outdoors, it all comes down to experience and your kit is only as good as your knowledge, so I highly recommend getting trained in Wilderness First Aid if you want to spend any extended period in the outdoors.

Here are some links I found useful about building your own first aid kit for hiking: 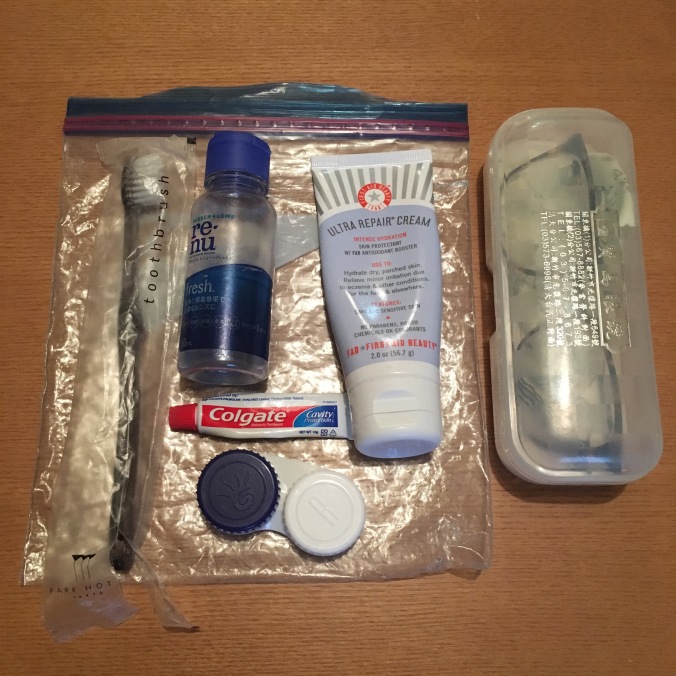 Self-explanatory: Hotel disposable toothbrush, toothpaste, moisturizer, contact solutions, contact case, glasses (getting Lasik soon to so I won’t have to bring all the eye stuff).

Honestly, I didn’t use that face cream until after I finished the trip and I forgot to bring lipbalm. It’s probably generally humid enough in Japan in the summer that you don’t need to bring any moisturizer, sunblock will be enough. Here’s something I read recently that provides good perspective for women on how to let go of the need to groom and look good all the time: http://www.foxintheforest.net/be-wild-love-yourself/. 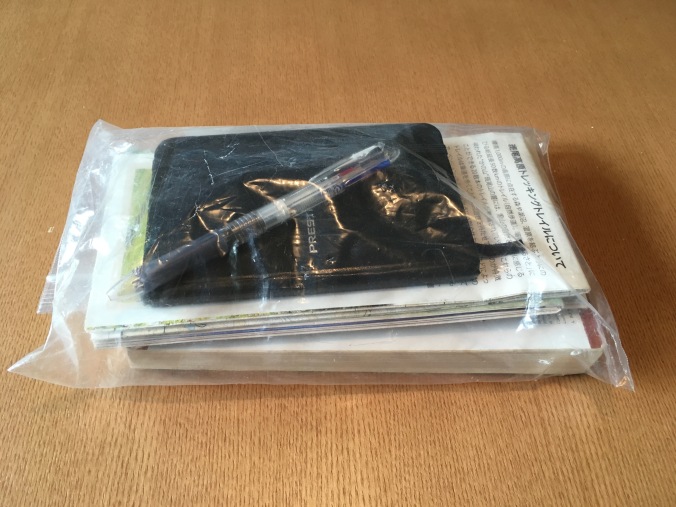 Forgot to include this in my overview photo above, because I was using the contents to write my Shinetsu Trail blogpost. I carried a book, maps, a small journal and a pen in another ziplock.

I bought a new 750ml titanium cookpot for solo-hiking, but when Genna decided to come along, I realized that now I have the perfect two person cook-set, because the smaller pot weights next to nothing and packs neatly in my old 900ml cookpot. My two-person cook-set consists of:

Ready to go in the morning!

Oh yeah, I actually made the last minute decision to clip some 100 yen shop flipflops to the outside of my pack. It was definitely nice to have camp shoes (especially after a swim), but they are not essential. Up in the air on whether I would bring them again.

Just another Teton Valley sunset. #nofilter
What it looks like from a distance when it’s sunny and snowing at the same time.
Mountain bike the Tetons! I forgot how hard it is to climb uphill! #ifyouloveuphillsanddownhills #ridebikesbehappy
Never gets old.

A window into my year in Hualien teaching English at Fu Shi Elementary School as a Fulbright English Teaching Assistant!