Note: I wrote most of this last spring for a previous incarnation of my blog, but am republishing here since my Facebook feed is full of cherry blossom photos now. We did this on April 6, 2017, so almost exactly a year ago.

So Tokyo’s shitamachi（下町）, literally “low city”, is a great place to cycle around because it’s a filled in swamp and very flat. Since it’s so flat, it’s not very difficult to get around on a mamachari, typical Japanese neighborhood grocery shopping bike which may or may not have more than one gear.

Last spring, after the snow season, I took some of the Schneider season staff who were staying at a backpackers near Asakusa on a cycle tour of the east side of Tokyo (otherwise they were stuck partying in neon-lit Shibuya).

Cherry blossoms in full bloom along a canal near Fukagawa

Taito City, the municipality where Asakusa is located, rents mamachari type bicycles for 300 yen a day (return by 8PM) from four locations. The most convenient pick up point for us was the Sumida Park underground bike parking facility located right next to Asakusa Station and Azumabashi Bridge.

I called ahead the morning of to try to reserve 4 bikes for us, and was told I could not reserve but that we would have no problem renting 4 bikes after 12 noon (this is why we ended up starting our tour around 1PM). So I would recommend calling ahead for availability.

There are numerous other options to rent bikes on the east side of Tokyo, but this public one is the cheapest.

You need to bring photo ID (passport or residence card for foreigners) and fill out the address of where you are staying to rent the bike. But it was a pretty smooth process and the bikes were of not bad quality. (I suspect this is where some of those abandoned mamachari’s at train stations that get fixed up by retirees in each municipality end up.)

There was a cool bike escalator to help you push the bike up the ramp out of the underground parking facility.

Kiyosumi Garden is a Meiji Era Japanese garden administered by the Tokyo Metropolitan Government. It’s designed so that you take a meandering walk around the pond, over bridges and stepping stones. The pond was full of koi, turtles, ducks and tons of tadpoles. There were also many beautiful birds stopping by. We were surprised by the amount of wildlife in the garden. Here’s the official website: http://teien.tokyo-park.or.jp/en/kiyosumi/index.html.

Completed in 1892, Tsukishima is the oldest landfill island in Tokyo Bay.

Enough high-minded tour-guiding. Actually, this entire cycling itinerary was born of my idea to take my friends down to Tsukishima for monjayaki lunch. Monja is my favorite food to haze visitors with, because it looks like vomit. But the ingredients are pretty benign and who doesn’t like to play with their food? I’m a nice person. I could be hazing visitors with shiokara (fermented squid pickled in it’s own guts).

There’s a covered shopping street on Tsukishima that is lined with monjayaki shops. Just pick a shop that looks busy but not too busy and walk in! 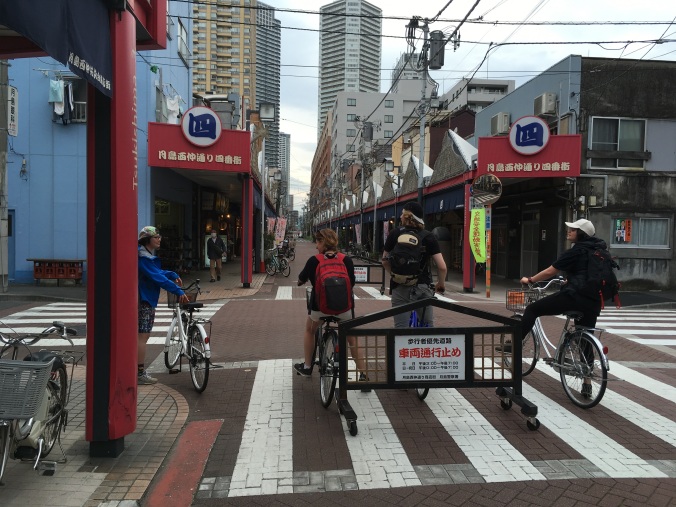 I’ve never seen the tuna auction and waking up at 3 am to line up for Sushi Dai does not appeal to me, but the outer (retail) market is always fun to walk around. Everything closes down by 3 pm though, so not much was open when we passed through here on the bike tour.

A bit of afternoon snack

Cycling straight down Harumi-dori from Tsukiji to Hibiya to get to the Imperial Palace, you will pass Kabukiza Theatre. The building is now kind of interesting from an architectural perspective because is was rebuilt in 2013 to have an abomination of a skyscraper coming right out of the top of it, kind of like Grand Central Station in New York.

Kabuki theatre is the Elizabethan theatre (e.g. Shakespeare) of Japan. It was born of entertainment for the masses, so there is witty banter, beautiful dancing, and exciting action scenes involving trap doors and other stage tricks. You don’t need to understand Japanese or know anything about the story (Kabuki plays tend to be in media res like Greek plays) to enjoy it. Traditionally kabuki was an all day affair where you would go and eat and drink and socialize all day (like Peiking Opera) and plays went on forever so people wouldn’t always be paying attention (like American baseball). Now, Kabuki performances are usually just a series of highlights from the most famous plays broken into matinee and evening sessions. If you want to see kabuki and have not planned in advance (the lower price tickets tend to sell out quick), you can try your luck to get a hitomakumi “one-act” ticket on the day of the performance. Tokyo Cheapo has a good article about how to do hitomakumi.

We passed near Nijibashi of the Imperial Palace. The Imperial Palace sits in the middle of Tokyo and since all train lines have to go around it, no train line in Tokyo seems to go straight east-west or north-south, making the Tokyo Metro map super intimidating. The palace is almost an exact 5KM loop making it a popular spot with runners. 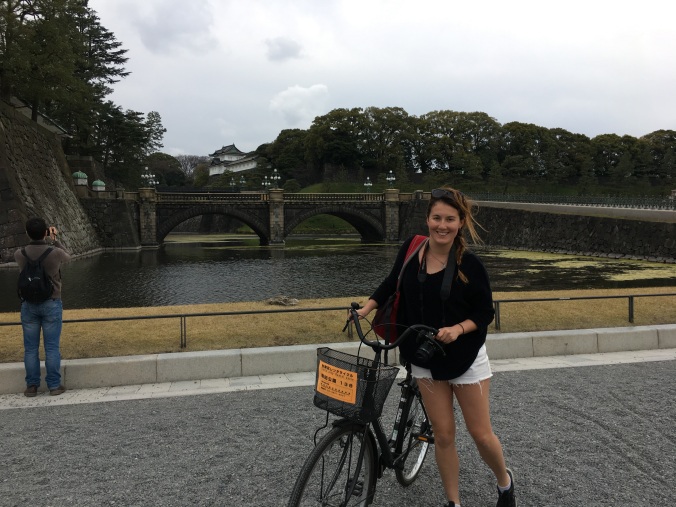 No bikes allowed here. Police came to shoo us away.

Unfortunately, there doesn’t seem to be a good bike path along the Sumida River. There is a walking and jogging path, but bikes are not allowed. We cycled across the bridge near Asakusabashi, headed north a bit on the other side of the river and then crossed back over another bridge before taking some back streets back up to Asakusa and the Sumida Park bicycle parking facility. There is apparently a cycle path along the Arakawa that I would like to check out next time.

Google Map of the tour for your reference below:

This is all I want out of life, and I’m so grateful I get to do it every day as a chore. #dogsarethebest
A dapper fellow.
Portrait of a Lady
Ace of spades, queen of hearts.

A window into my year in Hualien teaching English at Fu Shi Elementary School as a Fulbright English Teaching Assistant!