It seems like long-distance hikers, thru-hikers, ultralight hikers and outdoorsy people in general like to talk about gear too much. I think this is because (1) it’s easier to shop for gear online than to actually go outside and train in preparation for an objective and (2) reviewing gear and talking about gear and wearing and raving about sponsor’s gear is how all the “influencers” make money.

I feel very ambivalent about people bandying around numbers about how big the outdoor industry is and how it should have more political clout. As much as I appreciate what Patagonia does in sponsoring creative endeavors like The Dirtbag Diaries and fighting for Bears Ears, I don’t think that we can spend our way out of the environmental crises, no matter how environmentally friendly your camp shoes are. What we need to do is what they used to teach in elementary school back in the 80’s, before environmental issues were so politicized — Reduce, Reuse, Recycle. (Patagonia realizes this too.)

The outdoor community in the United States is very white and very privileged. People often talk about camping and backpacking as if it is free! Outdoor gear is very expensive and obsession with the latest and lightest gear can make costs appear even more daunting and insurmountable for #unlikelyhikers just trying to get into the outdoors. Having the right gear is important. For example, having a sleeping bag that is warm enough and light enough and not too bulky will definitely be key to an enjoyable backpacking experience. But, shaving off a few grams from your pack weight by buying a $20 titanium spork?… Probably not necessary. (Full disclosure: I had said titanium spork and am still sad I lost it. Still hoping it will turn up.)

When I started putting together my backpacking gear in 2016, I did buy nice, fancy, lightweight “Big Three” — pack, shelter and sleeping bag — after intensively researching the interwebs. And, I have been really happy with those choices. However, the rest of my kit was developed over time by cobbling together stuff I already had (my tiny Thermos was initially purchased to be a purse Thermos for commuting to work) or by trying the cheapest option (I still use a BRS stove) and gradually buying more expensive pieces as I figured out what would actually enhance my quality of life on the trail, e.g. moving from a Chinese knock-off Thermarest Z-lite sleeping pad to a real insulated inflatable pad. If you are interested in putting together a beginner backpacking kit on the cheap, PMags’ blog is a great resource, as he says “[t]he best way to learn about backpacking is not discussing gear online or going to gear sales but is actually to get out there.”

Without further ado, here is my JMT gear list. 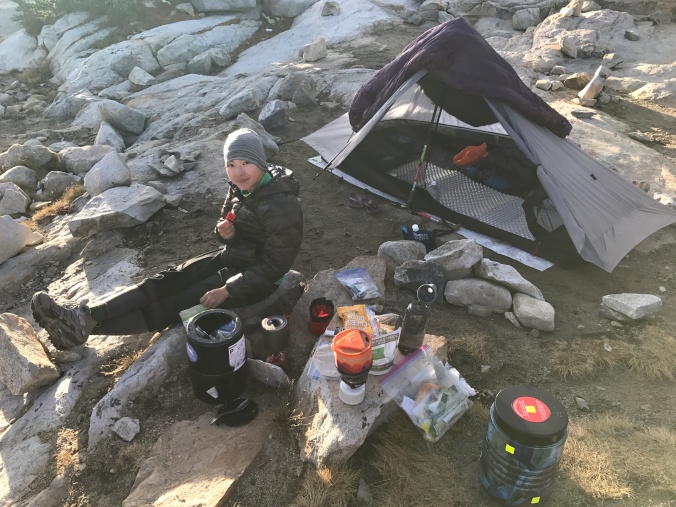 What I looked like camping on the JMT in 2017. My quilt is draped over my tent to dry out a bit over breakfast before we pack up.

Lookout! Crocheter knitting! It’s like a snowboarder skiing! I’m a one plank, one hook kinda girl learning to two plank and two stick this winter.
Friday was a bluebird pow day. I had never seen the top of Peaked from the top of of the Sac lift before since Targhee is usually so low vis. Those are the lines of the cat skiers coming down. As you can see, the Targhee cat skiing is mostly wide open low angle pow, good for (super rich) beginner pow skiers. #skitheghee #bluebirdpow #peakedmountain
Storm Chaser kinda day for sure! As @robertspetawx used to say “the powder hose is on!” #skitheghee #stormchaser #skibumlife
Super happy to have gotten out into the backcountry yesterday (before the weather moved back in). Also inspired me to take a ski lesson today, so I had a very productive weekend (my weekends are Tuesday-Wednesday). Now that the holidays are over and the snow has finally arrived, it’s time to set some season goals! #touringtuesdays

Outdoor Adventure for the Everyday Explorer

Brown Girl on the NST

The relentless pursuit of the everyman's (and everywoman's) adventure. By Brendan Leonard